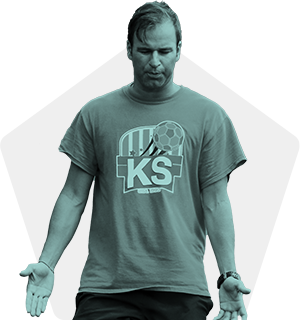 Kyt Selaidopoulos, the story of a boy who didn’t want to disappoint his dad

Kyriakos “Kyt” Selaidopoulos grew up in Outremont, the youngest of three children in a Greek family. Very early on, Kyt watched his two older brothers play soccer, the most popular team sport on the planet. But like most kids in Montreal, Kyt was focussed on hockey. The whole world might have been obsessed with soccer, but Canada, and by extension Montreal, was the land of hockey, and Kyt was a big fan. While his brothers played on the street emulating Diego Maradona or Lothar Matthäus, young Kyriakos liked to think of himself as Wayne Gretzky or Mario Lemieux.

Surprisingly, however, Kyt never really tried his hand at hockey. One phrase, which the children of many immigrants can relate to, explained this state of affairs: “My father was Greek,” he said. Other children would say their fathers were African, Haitian, Italian, Portuguese, French, etc. It meant not playing soccer was not an option. In Kyt’s loving family, where his parents worked hard to provide for their children and his older brothers always supported him, soccer was a way of life. So young Selaidopoulos would don a soccer jersey rather than put tape on hockey equipment; he’d wear cleats instead of skates; and his sweat would fall on grass, not ice.

One day, early in his career, Kyt found himself sitting in the Montreal Impact locker room. It was 1997, and next to him were John Limniatis, Nick De Santis, Rudy Doliscat, Patrick Diotte, Daniel Courtois, Paolo Ciccarelli and Lloyd Barker, all players 10 years older than him and role models for his generation. Valerio Gazzola, then coach of the team, walked into the locker room, shook his hand and said welcome. Kyt remembers the moment the same way he recalls the first time he ate pastitsio, one of his favourite Greek dishes. Kyt had just turned pro, but understanding what it really meant to be a pro would take time.

When he took up soccer, Kyt realized he had an innate talent for the sport. He was already better than his brothers. Looking back, he believes it was a generational thing. The 1977-78 generation, he contends, was the best in the history of modern soccer in Quebec. “It was one of the most gifted generations in Quebec,” he says, “and the proof is that it produced many professional players.” Even though Patrick Leduc and Pascal Occean were on the South Shore and Sandro Grande was in Saint-Léonard, the place to be a player for that generation was Jean-Talon-Rosemont. It was the team to beat. Kyt played there alongside his childhood friends Abraham François, Leo Incollingo, Arius Roldège and many others. He remembers one game in particular, a Quebec Cup final they had played in the rain and sunshine, and where he says Sandro Grande scored the most amazing goal of the century. That generation would go on to win the gold medal at the 1997 Canada Summer Games.

Throughout those years, Kyt Selaidopoulos believed talent was everything. He was a member of the Quebec U15 and U17 teams under the guidance of such coaches as Kostek Pawlikaniek, Pat Raimondo and Jean-Pierre Ceriani. Under Ceriani, he was even captain of the U15 team that would lose to Ontario in the final. Something happened at this point in his life, however, that still pains him to this day and would take him a long time to understand. As the Quebec team prepared to represent Canada at the Jeux de la Francophonie in Madagascar, Kyt was the last player to be cut by coach Otmane Ibrir and replaced by a younger player. It was dramatic. His lifelong friend, Abraham François, was on the team, along with Patrice Bernier, Sandro Grande, Arius Roldège, etc. It was especially hard that the team went on to win gold at these games. “Even today, when Abraham reminisces about this event, I stay quiet and lower my eyes. He knows by looking at my face that it still hurts.”

Kyt would only realize later in his career that his work ethic wasn’t serving him. It was something he didn’t know while he was sitting in the Montreal Impact locker room for the first time, thanks to the help of Tony Incollingo, the only agent he’s ever had in his career. “If I had understood what it meant to be a professional earlier, I would have had a better career,” he explains. “I thought my talent alone would take me to the top. I only worked when I felt like it.  It doesn’t operate that way in the pros because there are 20 other people working hard to take your place.” Kyt would go on to face more setbacks, including a tryout at a Greek first division club where the coach told him to get the hell out of his office. His career with the Impact was mostly with the indoor league. Surprisingly, it was his adventures in the United States that finally opened his eyes.

Kyt remembers sitting in front of a café on Bernard Street with Nick De Santis one day and telling him he’d like to quit outdoor soccer and try his luck with an American team in the Major Indoor Soccer League (MISL). Nick asked if that was really what he wanted. Kyt said yes. Nick then called one of his contacts, and a few days later Kyt was on a plane to Cleveland for the 2004-2005 season. “Nick De Santis helped me when I needed him. I’ll never forget that.”

In the United States, Kyt would play for the Cleveland Force, Detroit Ignition and Milwaukee Wave. In addition to the championship he won with the Impact in 2004, he won two other titles, one with Detroit in 2009 in the Xtreme Soccer League and one with Milwaukee in 2011 in the MISL under Keith Tozer. Tozer would give Kyt his first opportunity as an indoor soccer coach by finding him a position in Louisville, Kentucky. Kyt was always among the top 10 scorers in every championship he played in the land of Uncle Sam.

The experience that had the biggest impact on Selaidopoulos during his American journey, however, was suffering a serious injury. At the time, he was on loan from the Impact to the team in Huntsville, Alabama, where his good friend Abraham Francois was also playing. With two games left in the season, Kyt was in the running to be the league’s top scorer. He was in third place and needed to score goals in his last two games to win the Golden Shoe. Meanwhile, his agent called with good news: his contract had been renewed with the Impact for several seasons. The only problem was that both the agent and coach asked Kyt not to play the last two games of his season because, you never know, injuries can happen so quickly. But Kyt was stubborn and wanted to finish as top scorer. He still remembers the game. Everything went well until the last two minutes when he suffered a torn anterior cruciate ligament (ACL). Kyt’s first thought at the time was not about his new contract with the Impact or that his career was over. It was “What’ll my Greek father say? He’s going to kill me!”

Indeed, when his dad picked him up at the airport, Kyt could see the disappointment in his eyes. His father asked him just one question: “What are you going to do now?” Kyt replied defensively “What do you want me to do? I don’t know, my leg is done.” He didn’t realize it at the time, but it was the moment Kyt the businessman was born because he was asking himself the existential question: “What happens if my soccer career doesn’t work out? Am I going to be a loser and keep disappointing my dad, who’s been working so hard for us?”

The event changed his life. When he returned to the game after his surgery and eight months of rehabilitation, Kyt approached his career with an entrepreneurial vision. He negotiated his contracts better. In Detroit, for example, he was the highest paid player on his team, which was a source of several conflicts with the team owner. When the team won the title in 2009, the owner shook hands with all the players on the field except him, the team captain, an embarrassing moment.

Kyt, the businessman, founded Kyt Soccer school in 1999 and continues his activities there to this day. At the same time, he was part-time technical director of the CS Mont-Royal Outremont (CSMRO) soccer club, which was growing under the leadership of Luc Brutus and Max-Henri Metellus. Luc Brutus later introduced him to Durnick Jean, who would become Kyt’s business partner and friend. The two of them succeeded in expanding the school. Kyt Soccer doesn’t sell dreams to parents. Children come to play and train for fun. It’s important to Selaidopoulos that the kids at his school fall in love with the game while enjoying themselves. After retiring in 2012, instead of coaching in Louisville, Kyt decided to move back to Quebec to take care of his business and become full-time technical director of the CSMRO. It was also the time he began to think about creating an adult futsal league. His friend, Mike Vitulano, convinced him to submit the project to the Quebec Soccer Federation, and that’s how the Première ligue de futsal du Québec (PLFQ) was born.

Kyt’s head for business is always full of projects. When he started the PLFQ with Vitulano under the Soccer Québec umbrella, he was already thinking about the national futsal team. When the position of head coach opened up, he met Tony Fonseca, then Technical Director of the Canadian Soccer Association (CSA), and presented his ideas. In 2016, Kyt Selaidopoulos was selected from about 100 applicants to become head coach of the national futsal team. That same year, he led the team to the Concacaf qualifiers and came within one point of qualifying for the FIFA World Cup. Since then, he has continued to build the program by travelling across the country, from Quebec to British Columbia and into the territories. As a result of his hard work, we now have the Futsal Canadian Championship with eight provinces and territories participating. Selaidopoulos holds a provincial and national B licence, and his national A licence is pending. He also holds FIFA Futsal and FIFA Beach licences in addition to having successfully completed his Soccer Québec technical director course.

Before becoming national coach, Kyt Selaidopoulos was part of many adventures with Canadian teams as a player. He participated in the 2006 Beach Soccer World Cup in Brazil as captain. He also played in the qualifiers in Costa Rica, where the team finished second, and the 2004 Futsal World Cup qualifiers.

As a player or coach, the most important moment for Kyt Selaidopoulos in a soccer or futsal match is when the national anthem rings out in the stadium. Blood rushes to his face and he feels chills running down his body. “It’s incredible to represent your country, to know that people from all over who share the same nationality as you are supporting you and hoping you’ll win,” he explains. “It’s an incredible energy.” This is what Kyt wants for the children who come to his school’s camps: that they have fun playing soccer and are proud of their parents, city and country. Someday, when they’re older, no matter what work they do or where they are in the world, when they hear their country’s national anthem, they’ll think about their parents’ sacrifices and stand up to honour them.

Every time “O Canada” is played while he’s representing his country, Kyt Selaidopoulos thinks about his family and all the coaches and friends who’ve helped him while he was growing up, and he says thank you. The little boy in him, who used to walk around the streets of Outremont imagining he was Mario Lemieux thinks of his late Greek father and hopes he’s proud of him.